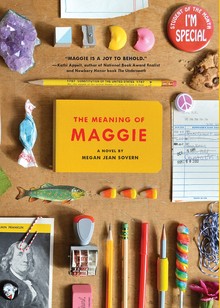 THE MEANING OF MAGGIE

As befits a future President of the United States of America, Maggie Mayfield has decided to write a memoir of the past year of her life. And what a banner year it's been! During this period, she's Student of the Month on a regular basis, an official shareholder in Coca-Cola stock, and defending Science Fair champion. Most importantly, though, this is the year Maggie has to pull up her bootstraps (the family motto) and finally learn why her cool dude dad is in a wheelchair, no matter how scary that is. Author Megan Jean Sovern, herself the daughter of a dad with multiple sclerosis, writes with the funny grace and assured prose of a new literary star.

Eleven-year-old Maggie Mayfield is an A-plus student with big plans for herself. However, she is also facing a lot of problems, including starting middle school and figuring out how to help her father who is out of work and in a wheelchair.