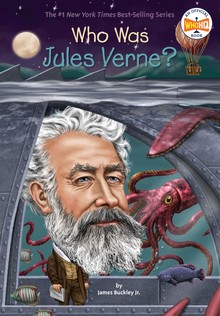 WHO WAS JULES VERNE?

u003cbu003eMeet the father of science fiction, Jule Verne.u003c/bu003e u003cpu003eBorn in France in 1829, Jules Verne always dreamed of adventure. At age 11, he snuck onboard a ship headed for the Indies only to be discovered by his father and have his dreams dashed. After his father made him swear to only travel "in his imagination," Verne kept his promise for the rest of his life. He began writing adventure stories as a young man and became a popular writer throughout France. Known for mixing scientific discovery and literature in his books like u003ciu003eTwenty Thousand Leagues Under the Seau003c/iu003e and u003ciu003eAround the World in 80 Daysu003c/iu003e, Verne is often called "The Father of Science Fiction."