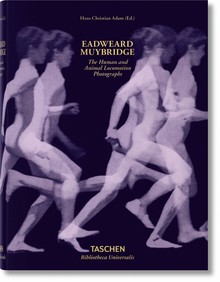 THE HUMAN AND ANIMAL LOCOMOTION PHOTOGRAPHS

English photographer Eadweard Muybridge (1830–1904) is a pioneer in visual studies of human and animal locomotion. In 1872, he famously helped settle a bet for former California governor Leland Stanford by photographing a galloping horse. Muybridge invented a complex system of electric shutter releases that captured freeze frames―proving conclusively, for the first time, that a galloping horse lifts all four hooves off the ground for a fraction of a second. For the next three decades, Muybridge continued his quest to fully catalog many aspects of human and animal movement, shooting hundreds of horses and other animals, ―as well as nude or draped subjects engaged in various activities such as running, walking, boxing, fencing, and descending a staircase (the latter study inspired Marcel Duchamp’s famous 1912 painting).This book traces the life and work of Muybridge, from his early thinking about anatomy and movement to his latest photographic experiments. Many plates of Muybridge’s groundbreaking Animal Locomotion (1887) are reproduced here. In addition, Muybridge’s handmade and extremely rare first illustrated album, The Attitudes of Animals in Motion (1881), is reproduced in large part. A detailed chronology by British researcher Stephen Herbert throws new light on one of the most important pioneers of photography.